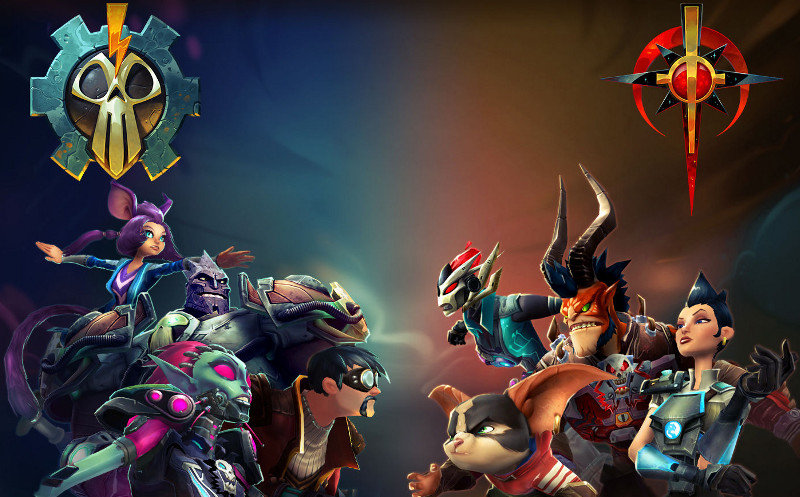 Wildstar is an upcoming theme-park MMO from Carbine Studios. Rather than trying to compete with WoW, they claim they're trying to capture the large ex-WoW player demographic.
Hope you're ready for a lot of videos. They're quality entertainment.

And of course there's a catch. There's always a catch. The game is not free to play. You need to buy it. And pay a monthly fee. They are, however, implementing the "Eve Online" system whereby you are allowed to purchase gametime from other players using in-game currency. It helps curb gold-selling and allows you to play for free if you are productive enough.
I'll be playing this one. I'll get a few people I know involved. Honestly, the primary reason that I'm posting this is that Carbine isn't doing terribly much in the way of real advertising and has asked players to help spread the word. Consider yourselves advertiseded.

I've been following this mmo for a while and would love to play it when its released. However lack of a job keeps me from doing so but such is life, still looks awesome though.
Top

I played during one of the beta weekends. I wasn't very impressed. I loved WoW from Vanilla to Cata and I was hoping this game would suck me in, but the beta didn't do much for me.

- The quests were boring and felt like they were created in 2005.
- All of the races look terrible.
- The UI is super cluttered.
- The sounds are extremely spammy. Playing the exact same sound every time I press 1 gets really fucking annoying when there's no auto-attack and you realize you're pressing the 1 key 24/7.
- The game looks dated and it's not even out yet. I mean seriously the game looks like torchlight 2 in 3rd person.
- The combat is a clusterfuck. It felt like GW2 in the sense that when there's multiple people it feels like you're contributing nothing.
- The classes don't seem unique. A lot of them use a resource AND a combo point system. I always hated the combat point system and it became the reason I started to dislike WoW (ruined Paladin for me), I was extremely disappointed to see that it's worked its way into this game as well.

I don't know how to explain it, but to me it just seems like every decision they've made doesn't feel right when you actually play the game. The environment and the races don't mix. All the fonts in the game (chat, quest log, overhead, combat) seem awkward, and don't go together.

I'm sure I could list more but whatever. I'm not even trying to just hate the shit out of this game, but it really disappointed me. I've been waiting for this game since it was announced and I signed up for beta the first chance I got.

It's really hard to see what people actually think of the game because of the fucking retarded hype that surrounds every single MMO launch. I mean people actually think the Elder Scrolls MMO isn't going to flop.. If you post anything critical of Wildstar on /r/wildstar you'll instantly receive a shit ton of downvotes.

I went from being pretty excited to not giving a shit in the course of a weekend. It'll be interesting to see what they can do to fix the apparent flaws, but with launch so soon I doubt they'll change much. Meh.

Jason wrote:Can't wait to fall in love with a beautiful young man

Jason wrote:Like if I successfully hook up with this guy amazing shit could HAPPEN

I don't know much about Wildstar still at this point. Haven't gotten through the videos yet. But I think the reason people are hyping up every new MMO now-a-days is because they're tired of WoW still being the the Big Man on Campus and all they really want is something new to grow as big as WoW and replace it. I've tried so many of the newer MMOs to see if it can replace WoW for me but so far I haven't found one I could stick to. Guild Wars 2, Rift, Aion, DC Universe, FF14, Planet Side 2, hell I even tried Rusty Hearts and the list could probably go on.
Top

I never got into beta. Going to actually try it for the first time this weekend.
I know it's perfectly possible to take all the right ideas and implement them just...badly. So it's entirely possible that it's going to be bad. But at least it seems to have character. That's what's going to keep me away from TESO, the complete lack of apparent character.
a1dan, I'm genuinely curious what kinds of quests you'd like to see? Personally, I find that the games that fight for quests to not be "bland" end up terribly. If you're not killing things and looting their corpses, are you really even playing your character? Or are you manning a turret?
Stills really don't look all that good. But I'm big on animations. I don't care how well modeled/textured something is if it's animation is stilted. And conversely, if the animation is good I'm willing to look past a lot. What I've seen so far looks good. I suppose I'll see how it is when I'm playing.
I disagree with Maha. At least, I know I don't mind WoW being as big as it is. It's a fantastic game. Everyone should give it a try. I just got tired of playing it. And it took a very long time for that to happen. I'm excited for this one because it looks like a lot of fun. And in all honesty, I kind of miss having an MMO to play too much. I miss going home from working KNOWING how I'm going to spend the rest of my night, sometimes. At the same time, I don't miss KNOWING how I'm going to spend the entire weekend, or canceling other things because GOTTA MAKE THAT RAID TIME YO. Hopefully I can find some happy medium, but that seems entirely unlikely.

I played during one of the weekend betas, too. I didn't like it due to most of the things a1dan said, and the fact that there's going to be monthly fees.

That being said, I've been enjoying Rift ever since it went f2p. Maybe if I'm lucky Wildstar go f2p at some point, but that's just wishful thinking.
"Too awesome to play; too legit to quit." — Team Spectator Motto

Why? wrote:That being said, I've been enjoying Rift ever since it went f2p. Maybe if I'm lucky Wildstar go f2p at some point, but that's just wishful thinking.

It would be nice if it went f2p, but the subscription model there taking seems sorta interesting.
Top

Alright, now that I've actually played it I can speak to a bit more.

The game is an absolute blast. It's exactly what I was looking for. I don't consider myself a completionist, but I was feeling compelled to go doing everything for no reason other than it was fun. And there's plenty to do.

I think I may get a bit of a1dan's complaint regarding the quests, now. What the quests actually were hardly mattered to me. I could get the UI to lead me to the nearest objective and kill/loot my way through most situations. Then I'd occasionally be reminded about how little it mattered when I'd suddenly get a little pop-up window "you just completed some quest chain; how was it?" It's a nice move for a beta, ask while it's still fresh. But I was on so many quest chains simultaneously and I wasn't paying attention to the majority of them, so I couldn't answer most of the popups.

The path system is outstanding. I can't necessarily speak to the others, but the Explorer path seemed like it would encompass things I would be doing anyway. It had an unfortunate tendency to regiment an activity that I enjoy and take it from "just fun" to something more akin to a job. But it led me to some places I may not have gone otherwise, and gave me timed challenges to do some of the same sorts of things I do just because, adding a bit of adrenaline to it. While it was always clear (at least looking back) that the devs had created an intended path, you were never punished or deterred from doing it in whatever fashion you wished. Just because there's a staircase over to the east, doesn't mean that jump spamming up this hill won't work.

I'm too poor to really get into housing, at all. I've got a bare lot. And a board that gives me buffs.

The starting mount is disappointing, primarily because Settlers managed to provide free rentals of much faster mounts in one of big early zones. Thats another point, the zones are HUGE (once you get past the new player experience) with subzones and different climates and enemies with quests throughout. It's the reason I couldn't keep track of quest chains if I'd wanted to. There were just so many hubs and so many quests.

This is a game that I wouldn't mind playing for a long, long time. I'll just see how it lasts with people I know. Can't play an MMO alone.

Did the first dungeon yesterday. Was ridiculously fun. Wiped on a single hard trash mob a couple of times. Apparently had some spell we had to work together to interrupt and needed the healer to have a group cleanse ready. For trash. Good news. And then the last boss. Was pretty good, and then this happened (oh booo, can't use embedded player with a specific time? 1:22 is what I'm talking about):

Too fun. So hype. Fight had like 3-4 phases. Mechanics to learn(even if simple and well telegraphed). Individual opportunity for failure! First dungeon. What the shit. Can't wait.

Sounds pretty fun, I never really played WoW or any MMO that requires that level of coordination and teamwork (for PvE stuff anyway, being Archon/Race Leader in RF Online was quite an experience). Might have to try it out if I can get a couple friends to play.
tahts halo
dont worry
o_o
Top

Beta keys for this weekend, if anyone is in need.
Top

Parasyte wrote:Beta keys for this weekend, if anyone is in need.

Keys... Keys everywhere.
https://forums.wildstar-online.com/foru ... ntry320313
Make sure you grab them from a North American site, so you can play on the US servers.
Also, Warplots:

YO I GOTS DA GAEM
Top

You've made the right decision. It's an excellent game to have!
Cannot wait for this to come out, I will be playing entirely too much.