The dumping ground for all joe.to garbage posts in an effort to keep the rest of the forums neat and tidy. All posts originated in another forum.
Locked
49 posts

Hey J2ers I was wondering if you guys listen to Q Anon, if you guys follow him or not. Do you believe him? If yes, why? If no also why?

My position is, I do believe him and I have been following him for quite sometime. What are your guys and gals thoughts on the subject?

It's just another conspiracy theory channel. Nothing special on this one.
Here the description on his latest youtube video.

In this update, Q anon tells us to spread the message far and wide.
Topics include Freedom of the Press, the takedown of the mainstream media and the CIA's MK-Ultra mind control program

MK Ultra was an actual program, Django, they legitimately looked into mind control as a weapon.


Project MKUltra, also called the CIA mind control program, is the code name given to a program of experiments on human subjects, at times illegal, designed and undertaken by the United States Central Intelligence Agency.[1] Experiments on humans were intended to identify and develop drugs and procedures to be used in interrogations and torture in order to weaken the individual to force confessions through mind control. Organized through the Scientific Intelligence Division of the CIA, the project coordinated with the Special Operations Division of the U.S. Army's Chemical Corps.[2]

The difference between the sane and the insane is whether or not you understand it was a failure and was basically just the CIA pumping drugs into people and psychologically torturing them. 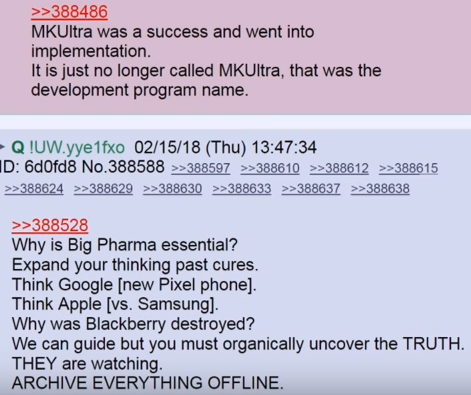 Above is a bit of q anon.

Moved to closest subforum to "lol wut" we have here that isn't immature.

Maybe immature to some people, based on what they believe personally, and I don't refer to me only. Techincally it is a current event. And damn fascinating how people are mainly divided on the subject.

EDIT: Correct-o-mundo Neelpos MK ULTRA was a legit thing that actually happen, now why would people think it's fake...?

Nightwolf wrote:now why would people think it's fake...?

because it sounds and was fucking ridiculous and the cia hasnt been very advertising of it
¡Viva Los Unban Threads!
PSN: IAMQuetzalcoatl // Steam: daruma.j2 // Add me and we'll play some games! ^_^
Top

Actually because most people don't research. They are fine in believing what they are told, without looking into most things. A sad truth which I encounter daily.

Nightwolf wrote:Actually because most people don't research. They are fine in believing what they are told, without looking into most things. A sad truth which I encounter daily.

Quite the opposite, it's because people research too much. You see, the MK ultra documents have been declassified by
the CIA decades ago (1977), and guess what, it was an astounding failure and waste of over qualified personnel and tax payer money ,because of the obvious reality that telepathy and mind-control have never been proven, not even by this million dollar enterprise.

The only fruition that came out of this project were: the drug (lsd), information gathering torture methods ,and some advances in the subliminal methods in modern advertising, and the movie the Manchurian candidate, oh and having sex with dolphins or some shit.

Thing is because it was a project that was carried in secrecy, conspiracy theorist gush all over the place about the thing and let their imaginations run wild, much like in anything ever in history that has had measure of secrecy attached to it like operation paperclip (US citizenship for nazi scientist to work on project Manhattan), codeword ODESSA (immigration of SS members to Latin America), project X-RAY (WWII bat bombs, seriously), Project STARWARS ( Ronald Reagan's direct energy anti nuclear laser) ,and Order of the Dolphin (NASA and SETI funded experiment to have sex with dolphins while high on LSD)

I'm glad Neel showed you the way to research. Keep it up.

More like years of binge watching dubious shows on history channel and discovery, if you want to call that research.
The problem when i said "people research too much" is one of disinformation ,and channels like q anon propagate this.

So... basically you're saying to remain ignorant? You're arguing that people researching too much is disinfo? I'm trying to understand your point.

and yes, people are fine with what they are told for some things (this varies person-to-person and with what they are told). people have a lot more shit to worry about in the day-to-day than 60s mind control experimentation done by the cia
¡Viva Los Unban Threads!
PSN: IAMQuetzalcoatl // Steam: daruma.j2 // Add me and we'll play some games! ^_^
Top

but all i got was a bunch of dumb science and SETI, lame
¡Viva Los Unban Threads!
PSN: IAMQuetzalcoatl // Steam: daruma.j2 // Add me and we'll play some games! ^_^
Top

narwal wrote:people dont research it because it sounds ridiculous and isnt advertised by the cia

Thank you for acknowledging your ignorance, please do me or anyone on any topic that you are uninformed, to do your homework. Please. Also you don't need the government to tell you to become educated individual.