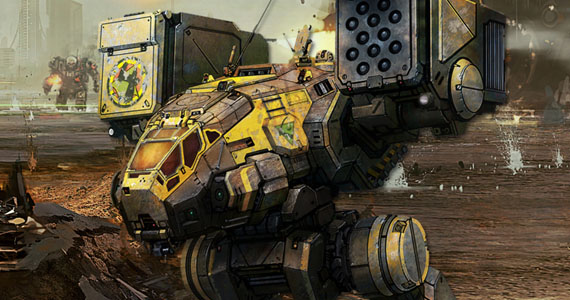 Now that MechWarrior Online has moved into open beta, the terrible truth can finally be told. The truth that some of us beta testers have been sitting on since we got accepted back in May. The terrible, horrible truth that caused PGI to keep the NDA shutters slammed shut for so long.

MWO is a good game.

No, really, it is. You might assume that they kept the lid on the drum because there were glaring flaws, or that the mechanics were unsatisfying, or that it was fundamentally broken in some way. But it's not. It's a MechWarrior game in look and feel as well as in name. It's got the "I'm driving a stompy thirty foot deathbot" thing down pat; it's difficult to express neatly, but there's something in the weight and momentum of the mechs that just feels right. The sound design is great too, from the obvious stuff like the weapons (the clearly dubstep-inspired pulse lasers are great, as is the solid thump of an autocannon firing) to the more subtle stuff like the ratcheting of gears when you twist your mech's cockpit around. If there's anything more satisfying in a game than the feeling that accompanies triggering off an ammo explosion in your target and watching their limbs fly off as they crash to the ground, I would like to be pointed in its direction....(continued in discussion)

Is it perfect? No, not even vaguely close. A good chunk of the technology that BattleTech fans will be familiar with (stuff like ECM, command consoles and the like) isn't in the game as I write this. Double heat sinks are in but bugged, there are only ten mechs to choose from, people wanting to play completely for free get stuck in horribly configured "trial mechs" for upwards of 30 games until they can save up enough space bucks for their own ride, there's only a single game mode and there are only four maps. Also, the netcode has issues that have caused PGI to limit the engines so that you can't go above 140kph as it was making light mechs warp space and time (which has rendered one of the three light mechs a useless mess). And sometimes the mech lab loses your components. And having members of your party randomly drop out isn't uncommon. Oh, and we won't get community warfare features until something like six months after we hit open beta. And if you want a tutorial you need to watch a bunch of videos that PGI made, because the game itself is not especially newbie friendly right now.

Yet despite all that (which is frankly a lot to forgive now that I type it all out), I'm putting in a couple of hours pretty much every night - not for the grind, but because I'm having fun with it. Getting on Mumble with a bunch of Goons and driving space robots is the most fun I've had playing videogames in years So yes, it's a shame that we didn't get the single player MechWarrior 5 that most of us probably wanted, although Bryan Ekman's recent impromptu Q&A on the forums suggests that PvE content is something he’d love to introduce. MWO really does have the potential to be a great MechWarrior game.


So, assuming that this has somehow enticed you into signing up, here are few useful things to know:

1. Are you a member of the Something Awful forums? If so, visit this thread and follow the instructions to sign up for Word of Lowtax. If you’re not an SA Goon, find people to play with. There are many clans you can join and there is an unofficial TeamSpeak server (details are in the MWO Beta forums) that you can log into to find people to drop with. You can play alone, but I do not recommend it. This is designed as a team-based game, and if you’re trying to communicate with your team using the in-game text chat you will find yourself trying to call out targets while under fire, getting killed in the process.

Unless you are playing with a premade group, assume that your teammates are drooling idiots. You may be lucky and have a decent group but chances are that you've got people whose response to "What's our plan?" Is "Win lol" or even better "Shoot." Not only is the notion of any sort of organised fight alien to these people, they seem to find the very notion absurd. They will scatter in all directions, get killed one at a time and then complain that premades are overpowered and that you didn't back them up. Your instinct will be to try to help these people. Do not give in to that instinct. They do not want your help and are incapable of accepting it. You may feel that I am being harsh about this, but I am not. I have run in pickup groups and seen these people at work, and the experience has made me vow to never play in pickup games again.

2. Get logged in and pick a mech. Go pick a trial mech (even if you’ve bought some MC - do not spend your in game currency until you’ve driven a robot or two). At this point, whatever you’re driving is going to be a stock build from the tabletop game (because even with a Founder's Pack you have no C-Bills to customise your mech) and therefore generally bad. Everything in tabletop BattleTech games is balanced around weapons taking 10 seconds to cycle and the heat dissipation mechanic is designed around that. Here, you can fire most weapons at least twice in ten seconds, and many of them more often than that. This means that stock mechs can often fire about twice before shutting down to overheating. This is not fun, but as long as you’re not determined to fire everything all the time you can manage it.

3. Hit that launch button (or if you’re in a group, then wait for your group lead to do it) and go shoot robots. There’s guides to all this in the MWO Beta forums, but the basics are:

Hit R to target things
Use the arrow keys and right-ctrl to assign weapons to different groups
Left mouse will fire your currently selected group (indicated by the vertical line in the weapon group display, controlled by the left/right arrows)
Number keys fire the remaining groups
W/S throttles up/down, A/D turns left/right
The mouse aims your arms and torso - the circular reticle indicates where your arm mounted weapons will hit and the crosshair indicates where your torso weapons will hit.
Space will fire your jumpjets (if you have them) and launch you skyward. Remember to save some juice for when you’re trying to land or you’ll shatter a robofemur.

4. Earn money from matches and customise your space robot. Again, if you’re a goon, there’s a wiki full of information and a Jabber server full of people to help you. Some parts are objectively better than others, some weapons are situationally useful, and some are worthless.

5. The Yen Lo Wang is bad. No, shut up, it's bad. It's the worst Centurion variant with a terrible paint job. The cannon arm doesn't even move left and right, so it might as well be a torso weapon. It has slightly boosted turn stats (which PGI have announced are a testbed for some changes they have planned to give all the mechs customised stats) and a 30% boost to cbill earnings. Which you will need because you will constantly be shot to pieces in your terrible anime robot. Do not buy the Yen Lo Wang. People who complain that this thing is an indication that PGI intend to move to a "pay-to-win" model need to drive this thing for a couple of matches and rethink their view.

There’s a lot more to it than that, but this should be enough to get you up and playing


Written by Fil5000, reposted by prolix here, all credit to Fil5000 /wol/themittani/etc
Top

an update, most faults spoken here are since rectified, this post is a few months old now - ECM/commandconsoles added, much much prettier, etc few more mechs etc

want to stay updated with the games progress? everything including this post can be found here - http://themittani.com/search/content/mwo
Top

You make a compelling argument to play, but any game where I have to group up with people outside of the game to play usually goes in that pile of games that I really want to play, but can't coordinate with people I play with are online or have the time to set aside for the game. (like planetside)

Really want to try it out since I loved mech warrior games in the past.

Even if I don't play, this was a great read regardless.

Because, since you don't know me, there is a great possibility that I'm on an higher intellectuel level then you are on.

For the most part before I joined WoL, the solo queue games were still pretty good. Players have became a little better and don't just runaround like mindless fucks half the time.

Played the beta and it was super fun. I would recommend at least giving it a try.
Top

I liked it and i played this with prolix last year.
Very fun, i haven't played it since because i was with bad internet for a while ,and because dota 2.
I kinda wan't to hop back into it. The only thing i didn't like was that the free mechs weren't so good for beginners and you had to get used to the movement.

You almost tricked me.
only ten mechs to choose from, people wanting to play completely for free get stuck in horribly configured "trial mechs" for upwards of 30 games until they can save up enough space bucks for their own ride, there's only a single game mode and there are only four maps
"if only there was such a thing as an affordable gaming laptop" ~collin day, 1993 - 2013

they've added 6 map variants and 3 new mech types since written. update going out today so if any connection issues, it's because the servers are updating. - http://mwomercs.com/forums/topic/97818- ... o-1pm-pst/


On note of free mechs, they are better than they used to be. PGI actually puts useful weapons on them now. The only problem is since they are trial mechs you still can't customize them. I tend to have the cash to buy a brand new higher tier mech after about 15 games of income.
Top
Post Reply
9 posts • Page 1 of 1